This day really annoyed me. From the start it appeared to be a decent setup but low level shear was lacking. Storms were expected to form in NE Oklahoma and move into western Missouri. Moisture and CAPE were off the charts with near 80 degree dewpoints. We settled on a target area near Osage County and took off. Things looked okay but soon began to deteriorate. I had blown a fuse earlier in the trip and didn’t realize I needed low profile versions. So we only had one inverter open to charge devices. The oppressive heat was also too much to handle. Highs in the mid 90’s with dewpoints near 80 made it very uncomfortable to even think about getting out of the car. We ran the ac the entire time and kept the windows shut. Eventually we met up with Corey and waited for storms to go off. Eventually they did and it looked promising. We made out initial advance in the wide open Osage Grasslands and were treated to a nice rain free base. 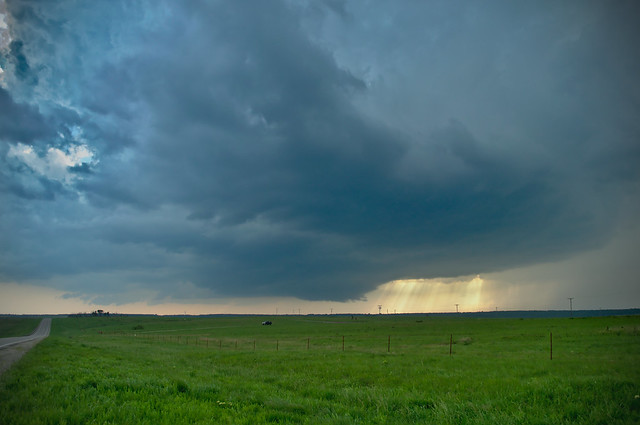 The storm moved further east a long an outflow boundary and began to wrap up just north and west of Tulsa. We tried to keep up with it but as we neared Skiatook lake, the storm went outflow dominate and blasted away at warp speed. A few other chasers managed to score a few small tornadoes down near the Red River( a target we dismissed as fake news) and further south in North Central Oklahoma. We drowned our sorrows in chicken wings at Bdubs and were treated to a fantastic lightning show on the way home. This was my last trip of the chase cation and I was disappointed. I got my things ready and left the next day to head back to Colorado. The trip hadn’t panned out like I thought. We had only netted 4 tornadoes and chased 3 times. Little did I know, my year wasn’t over just yet.